Today Ayrton Senna would have been 52 years old. Take a moment of silence for one of the greatest Formula One drivers.

Want more Senna there is a great movie on Netflix
Please consider AdventureCORPS in your 2012 ride calendar!  I hope to see you “out there”

Last night I took my son to see Life Cycles.  I thought it was awesome.  The cinematography was nothing short of incredible.  It is a must see movie.  And while the images in the movie are stunning and may distract you, please pay attention to the narrative …it is inspiring, thoughtful, meaningful and felicitous to anyone who has ever thrown a leg over a bike.

So some have asked how opulent the place I’m staying at really is?  Well check out this video.

So many videos and pictures were taken and I’m still trying to sort them out.  But here is one that has good picture quality and narration.  YouTube of course compresses it and it’s not as good once uploaded. I am passing Furnace Creek 508 Hall of Fame racer Kevin “Wolverine” Walsh on the climb to Randsburg (only about 120 miles into the race) just as it pitches up to 9 or 10%. Kevin is my friend and racing is racing right? But friends don’t drop friends… they just make them chase 😉

I put together a video of the great scenery the Tour de Francis has to offer. The event was held in the Frazier Park area with a lot of climbing, including the always difficult but very gratifying climb up and over Heartbreak.

I used some photos from the Adobo Velo pre-ride on 7/24/10. I am still working on a ride-report and will post that soon. For now enjoy the video below. You may want to choose High Definition 720 and full screen.

Sorry for the delay but it takes a long time to cull the over 800 pictures, and video footage, reducing down to just 10 minutes. I would make a terrible editor in Hollywood. Getting a movie under two hours would be quite a chore for me. There were so many great shots with lots of deep meaning for me. Thanks to my crew who took the time and effort to take such great shots and STILL found time to take care of me. Without their care I would not have finished.

A MUCH BETTER FULL SCREEN VERSION CAN BE FOUND HOSTED ON MY WEBSITE VIDEO GALLERY. 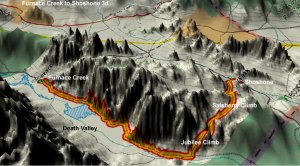 Here are just a couple of comments I’ve seen.

“I was only averaging around 11 mph. Sand, dust, and rocks sprayed in the air. I tried to yell to my crew as they pulled alongside, probably about how ridiculous the conditions were, but realized neither of us would ever be able to hear each other. I shook a bottle, and got back a full bottle of Perp. We’d have to use gestures.”

“…the 50 miles between Furnace Creek and Ashford Mills was much worse this year than in 2004.”

I left the Furnace Creek Time Station knowing that I would face headwinds as I went south through Death Valley but I had no idea how ridiculous they would be. The winds were blowing a steady 25-35 mph and gusting up to 70 mph. I can’t express to you how humiliating it felt to be riding at 7-8 mph into those headwinds. I pushed the pedals hard and got nowhere. I eased up on the pedals and felt like I was going backwards. I couldn’t get in my aero bars because I was being tossed around like laundry on a clothesline.

I would ride for 30 to 40 minutes and then pull over exhausted — physically AND mentally. When the road would turn slightly and the headwinds became crosswinds it was extremely difficult to keep the bike upright. I would lean into the wind and when the wind would shift and I would go wildly across the road. I felt like I was in the start house of a Time Trial and balancing myself with the spotters’ help and then they would let go of me as a sick joke. 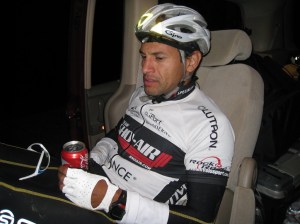 This mental and physical torture went on for hours. It took me six hours to ride 30ish miles. Eventually, at 5:07 am, Brandy, my crew chief, pulled me off the bike and suggested that I take some time off the bike. The “plan” was to wait until daybreak to see if the weather would improve. Meanwhile, I would have time off the bike, rest my body and recharge my mental energy.  Remember, being in Death Valley our cell phones are more akin to paper weights than communication devices.  We had no way of reaching out to the “outside world”, the internet, to find out what the weather forecast might be for the next few hours.  Many riders took naps of at least a couple of hours.  I have trouble falling asleep when I first get off the bike.  By the time I get comfy so much time has gone by I can’t take a nap then.  My crews, bless their hearts, have always found a way to fall asleep almost instantly when I’ve gotten off the bike.

Daybreak did bring slightly better conditions but only slightly. Or was it that I was refreshed from the hour off the bike? One thing I’d like to mention is the tenacity and will power Isabelle Drake, who was part of a 2X Sandhill Cranes, displayed while on the Furnace Creek to Shoshone leg. She battled through the night in short spurts like I did. We would leap-frog each other and give each other motivation to continue. One time when I pulled over exhausted she even said “Don’t you stop (or quit) and leave me out here!” Isabelle you’re an inspiration. I’m proud of you and glad to have witnessed your ride!

Based on my personal experience, the winds this year were the worst I have ever ridden in my four Furnace Creek 508s and at least five other Death Valley Double Centuries. I fought the winds as the sun came up and my only goal was getting to the base of the two exit climbs out of Death Valley, Jubilee Pass and Salsberry Pass. The first climb starts at mile 300 and climbs about 1000 feet in five miles to Jubilee (El 1285’). A one-mile descent leads to the next climb, about 2300 feet in 9.5 miles to Salsberry (El 3315’). Source 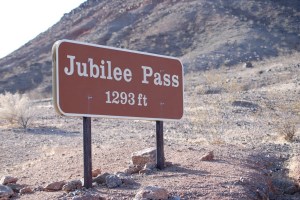 If you can believe it I was so happy to be climbing again. Well actually, I love to climb more than anything else. The climbs were uneventful just climb and climb some more. The best part of these two climbs was I was no longer riding into a headwind! LOL! 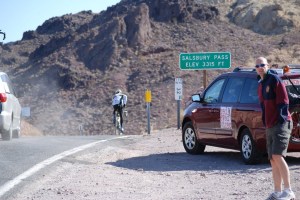 I rolled into Shoshone at 10:18 am Sunday morning. I’m almost embarrass to say that it took me 10 hours and 41 minutes for cover 75 miles but I’m proud to say that I continued on from Shoshone. By my count (17) SOLO riders, (4) 2x teams and (1) 4x team DNF’d before reaching Shoshone. But I was still standing and that has always been a great motivator to me.

I found this video on the Fluid page of Facebook.  I thought it made an important point.  Making exercise fun gets more people moving their bodies.  Obesity is a major medical problem in America.  Enjoy this video