I debated whether I should ride yesterday morning.  I haven’t been sleeping well lately and it’s hard to get up early in the morning and go for a ride– especially a long ride.  Because of some personal issues my motivation is way down and I’m not as enthused about riding my bike.
I left the house later than usual when I am doing a century plus route.  It was past 8am. I was just cruising along on the Coast Hwy, southbound, when two riders came up alongside me at a light.  We rode hard from Jamboree to Laguna Beach –trading pulls and working the rollers.  It felt good to be pushed.  In Laguna Beach they invited me to join them and their group.  It appears they were meeting at Top of the World and doing the steep hills of Laguna Beach.  I declined because I was running a standard chain-ring set-up of 53/39 and an 11/23 cassette.
If you are not familiar with the hills in Laguna Beach they are very steep.  Many are over 12-15% and go on for about a mile sometimes more.  I ended up doing the hills anyway– alone. As I said before, I wasn’t motivated so going on a century was not appealing.  I figured I’d do a couple of hills get some elevation gain– quickly and then go home.  I also thought that the steep hills would get me physically and mentally prepared for the last climb in the Mount Laguna Bicycle Classic on April 17 blog post here.  Pine Creek Road has extended sections over 12% and peaks out somewhere in the range of 18% grade.
I began my hill repeats by going up Cress which connects to Summit Dr.  Then I descended Park Ave and climbed that twice.  It’s funny to see the pick-up trucks shuttling the downhill mountain bike guys/gals up so they can descend.  I kept seeing the same trucks with bikes on the way up and then no bikes on the way down.  Isn’t climbing half the fun?  I then found another hill not as steep called Temple Hills which you can begin climbing from PCH at Thalia.  I climbed that hill twice as well.  I did the climbs mostly seated just working on my pedaling technique and working on leg strength.  Let me tell you a 39/23 is NOT the friendliest gear to climb Park.  Ideally, you shouldn’t attempt these hills with anything less than a 12-27 cassette.  I would go one step further and suggest a compact crank.  Temple Hills is more manageable.  It’s still tough but the key was slow, methodical pedaling to work on proper technique. 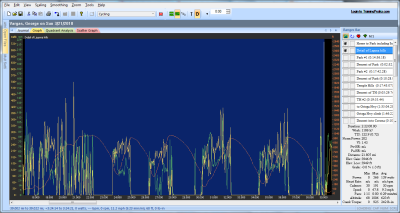 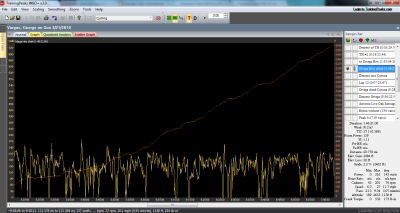 Ortega Hwy climb data from Training Peaks
Distance:  20.778 mi
Elevation Gain:    2484 ft
Grade:    2.2 %  (2465 ft)
The climb from Lake Elsinore on Ortega Hwy is a nice climb.  You can actually see the elevation you have gain because the road has many turns that double back on themselves and you can look down.  The climb is 4.8 miles and gains 1300 feet with an average grade of 5.3% –with dips.  Up and over Ortega Hwy and then up Antonio Pkwy continuing on to Live Oak and Santiago Canyon.  It was getting dark and I was racing the sunset.  I didn’t make it.  It was 845 by the time I got to a restaurant to eat and past 9pm before I got home.
My not so motivated start and short ride turned into 160 mile ride 13 plus hours on the bike.  My legs were wrecked. I was famished and really cold.  I was under dressed and cold and I was calorie deprived.   I didn’t take any nutrition stuff with me since it was only supposed to be a 2 hour ride.  The calorie deprivation made me feel colder than I normally would.  The last 2 hours of my ride were in the dark with no lights, no reflective gear and dark clothing.  I know not very smart eh?    But it’s done now and I am stronger physically and mentally for it. 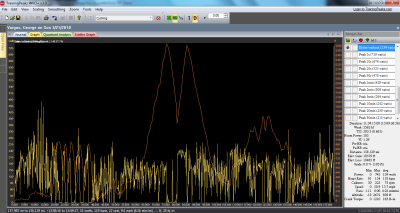 Just for kicks on the last 9 miles of my 160 miler I was putting surges over 600 watts topping out at 743 watts which incidentally  was the highest for the day but came at mile 150.