It’s getting closer and closer. Now let’s continue with my mini-series of posts associated with the mistakes I’ve made in preparing and racing the Furnace Creek 508.

Let’s talk about 2007.  During the off-season of 2006-2007 I had this crazy idea of doing something epic on a fixed gear.  My long range goal was to do the Furnace Creek 508 fixed gear.  So I built my second fixed gear bike and started experimenting with longer distances.  I started with brevets (unsupported events) and then progressed onto supported Double Centuries.  My form was progressing nicely in March and then I was thrown a curve ball.

I was invited to join a 4-person team for Race Across America which left in June.  I had always dreamed of doing RAAM — but as a solo racer.  I knew I didn’t have the time to train properly with family and work commitments so this seemed like a good alternative and great opportunity to experience some of the difficulty of RAAM.  Well the 4 person turned to 2 person and that was even more exciting to me.  I had to change my training completely from long endurance rides to short 2-3 hour medium to high intensity rides because of the demands RAAM relay.    Well after sorting out my training and completing RAAM 2 person in 9 days 18 hours and 55 mins.  A footnote- by partner DNF’d and the last day and half I rode Solo to the finish. It was interesting to do that after 7 days of suffering as a relay team. It actually felt better to just ride until I wanted to stop and rest. With RAAM done now it was time to refocus on my real goal for the year– the Furnace Creek 508 Fixed Gear Solo.
I did a few more climbing doubles multi-speed but would do all my training on my Fixed Gear.  On Wednesdays I would commute from my home in Huntington Beach 74 miles to reach my client’s house in Rancho Santa Fe by 615am.  That meant I would leave HB at 2am.  I would train with him for an 1.5 hours and then be at work by 8ish am.  I would sometimes hook up with our shop ride as it was ending and hold my own in the sprint.  I would report to work with a fixed gear century (100 miles) already done and it was only 8am.  Then I would ride home after work for another 65 miles.  I would only do that on Wednesdays but the other two days I would commute in and get 130 a day.
Everything was going well until 6 weeks from the event.  I caught a cold that lingered and lingered and lingered.  I couldn’t kick it and I was sick on the final 6 weeks leading up to the event.  You could say I had fresh legs but I know I lost fitness.  In the end it didn’t matter because my goal was to finish.  My goal was to challenge myself and find new limits of my physical and mental toughness.  In the process of finding those limits I became one of seven riders in 34 runnings of the race to ever complete the Furnace Creek 508 on a Fixed Gear (49 x 17).

So the lesson learned was too much training with too much sleep deprivation.  Another lesson learned  was DO NOT MESS WITH YOUR SADDLE HEIGHT!  I raised my saddle about a 1cm a week before the event.  I had to move the saddle forward so I also raised it and the combination of those two things wreaked havoc on my left knee in the event.  I think I also choose the wrong gear.  I was gearing for the flats and the downhills (35,000 feet of climbing means a lot of descending lol!) but some of the climbs Towne Pass in particular really hurt.  Towne Pass, which comes at mile 199 and after 11k of climbing, is a 13 mile climb with a 6 mile section that averages 9% ouch!  My nutrition was good this time and the only sleep problems we had was the crew couldn’t stay awake through Death Valley so we had to stop in Badwater much to my chagrin. It took me 45:12:45 to finish “the toughest 48 hours in sport”. 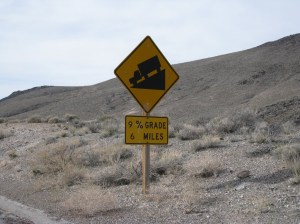