Shoshone Time Station #4 to Baker Time Station #5 (Mile 326.4 – Mile 382.6)
I felt a huge relief as I rolled through the Shoshone Time Station. I felt as if the worst was over…and it was. Even though there were more winds in the latter stages, nothing was as bad as Death Valley. This next section looks so easy on the profile but yet every year it takes a lot more effort than it looks.

My crew vehicle needed a new tire since the space saver spare was limited to 50 mph. That would’ve made for a very long drive home from Twentynine Palms.  Not to mention that we would be getting into the finish in the wee hours of Monday morning.  In other words, nothing would be open at 1am to get a new tire when we arrived.

The decision was made by Brandy, my crew chief, to roll on ahead and leave me unsupported. I like the comfort and security of having the support vehicle directly behind me through this section because the big rigs and pick-up trucks towing their “toy haulers” often buzz me way too close. My crew chief stocked me with food, No-Doz and flat repair and they went on to Baker. Good thing they left when they did since the tire shop was closing when they arrived.  The proprietor was gracious enough to stay open after-hours and sell my crew a new tire. 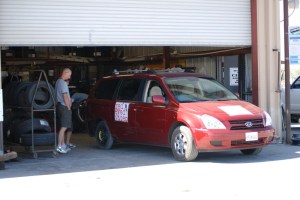 I was falling asleep on this section. We were about 28-30 hours into the race and only 350 miles. I was just slogging along. I know I lost a lot of time.  I even got off the bike because I was swerving so badly.  The winds impeded my progress.  The winds were probably only in the teens as far as wind speed.  I took three No- Doz in the 30ish mile section to Baker. I made it into the time station just as my crew was arriving from gassing up, buying food and cold medicine.

I forgot to mention that one of the side effects of the windstorm was my sinuses were so clogged I couldn’t breathe.  I got some relief from a crew on this stretch I can’t remember that crew name. I think they were a 4X team.  Brandy bought nasal spray and that really helped to clear up my sinuses. 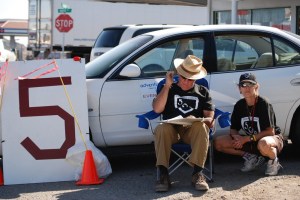 I arrived at the Baker Time Station #5 15:13 or 3:13pm Sunday or 32 hours and 13 minutes elapsed time. I always feel relieved getting into Baker. I feel I have the race in the bag. It’s only another 125 miles to the finish.