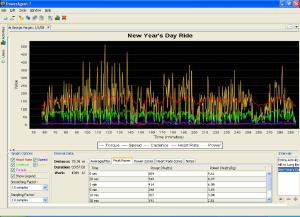 Happy New Year to all my readers out there!!!

I wanted to start my 2008 year off with a century and I heard about the Orange County New Year’s Day ride from Brandy, my girlfriend. I had a few concerns because big rides attract a lot of riders. They come in all skill levels — some that posses the skills to ride in tight quarters and at high tempo and some that just want to see how long they can hang on. I emailed -Anthony D. Morrow PR Director, Editor & Webmaster for Velo Allegro Cycling Club. I voiced my concerns and he put me at ease. I thought it would be a great way to get some tempo work in– something that is hard to do while training alone.

Well let me tell you that I had a blast. The ride is big, and I mean big. There had to be at least 400 riders and we took over one lane and sometimes two lanes as we headed southbound. You could see cyclists that were traveling northbound making u-turns to get on. It is better to catch the ride from the southbound side. The “peloton” just kept getting bigger and bigger. It was great to see the faces of people alongside the road cheering us on as we went by — especially the kids. Hopefully, we motivated the next generation of cyclists to pick up a bike and ride!!

Being an Ultra cyclist I do a lot of training alone and it was a welcomed change to see so many teams. Amazingly enough even in that big group I recognized a few friends. The pace was fast and by the time we reached Dana Point – our first regrouping point– many riders had peeled off. Less than half of the original group headed inland to do the full loop. We rolled through South Orange County where the pace was moderate to high but not nearly as high as it was on the coast. The pace really picked up as we skirted the El Toro airfield. The pace and the crosswinds created gaps and I was getting dropped. Luckily, there was a traffic light and I was able to get back on. Also at that light I saw Brandy who had doubled back on the course from Newport Beach so she could do the last section of the ride.

Eventually the “peloton” ended up back at the coast after going through Back Bay. Once we hit the coast we peeled off and Brandy and I got some coffee. I ended up with 95 miles for the day and some good tempo training. All in all a great way to start the new year. I highly recommend this ride but I wouldn’t go out the night before and party it up too much!!

I was pleasantly surprised when we got home, to find that Brandy had ventured out to PCH in Huntington Beach and Newport Beach this morning to see the ride pass through and snap some pictures. You can find all of Brandy’s photos from the ride on my flickr page. 2008 Orange County New Year’s Day Ride pics.

I will also post a route sheet and overhead map of the course on my website www.epictrain.com.

The peloton leaving the light at Superior in Newport Beach.

All smiles after a hard morning of work!

I had to turn the camera on Brandy for once!