“After you pass through the funky throw-back hamlet of Amboy (where you can not count on any services), you cross the valley and at mile 472 begin the last climb: 1500 feet in 10 miles to Sheephole Summit (Mountain Section Ten). The climb begins gradually and gets steeper near the top. The shoulder is very sandy; the crew should be careful with the vehicle. A quick descent leads to the rough road and rolling slight uphill to the finish line”

Last year Almost Amboy was my favorite Time Station. They had the place decorated in a Hawaiian theme. It was cool and the energy from the volunteers was refreshing. This year it wasn’t manned by the same folks and it just didn’t have the same feel to it.

My only focus after leaving Almost Amboy was chasing down Thrasher. He was so far gone I knew it was a lofty goal but it spurred me on to take the last 58 miles and give it all I had left.

I was really tired (understatement) and falling asleep just putting in the miles on my way to Sheephole Summit. And then I started “chasing the lights”. I did the same thing last year. There’s something about knowing you only have 50 miles to go —heck that’s just a club ride— that really motivates you.

I started doing intervals on the climb. First couple of intervals were just at a moderate level—remember I was falling asleep so moderate is actually a step up. They didn’t last long only about 30 seconds, and then 1 min, and then 2 min. After a few of those I started building the intensity and was doing 30 sec and 1 min long intervals at very high intensity. As I got closer to Thrashers’ lights it motivated me even more. After a long chase, I passed him on the climb and again he passed me on the descent. This, like I mentioned before, was fun for me and it kept me alert and motivated.

If you look at the profile the last 25 miles are a steady incline. I caught Thraser again and I just wanted to keep him within reach but his follow vehicle yielded to the right so I sprinted past him as fast as I could remembering Chris Kostman’s comment on passing “….and then as you pass them you blow their doors off…” Not an exact quote but it is pretty close. REMEMBER I HAVE BEEN UP 40+ HOURS THIS WAS VERY EXCITING TO ME AT THE TIME! I hope now when you read this you can feel some of the excitement I was feeling. The way I see it, it is little things like this that fuel me to the finish line after so many hours. Thraser and his crew were very nice people and congrats to them for finishing. I also passed the 4x person team Pac-Rats in the last five miles.

As I was nearing the finish I asked that my crew cross the line with me. I thought it was important for them to share in my success since they played such a vital part in it. My crew was great. I was spoiled by them and I wonder how I will find a better crew. Brandy, Terry and Timmer thank you so much for all your support. I couldn’t have done it without you. And that’s it I FINISHED THE FURNACE CREEK 508 FIXED GEAR SOLO. One of only seven riders since 1983 to do it it Fixed Gear. 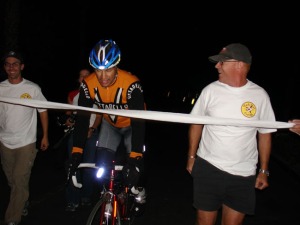 Shaking hands with Thrasher after the race.