On Saturday May 1, I completed the Breathless Agony Century.  It is without a doubt a “climbing century”.  I wouldn’t recommend it as a first timer’s century.  The time cut-offs are listed below:

To complete the 3 or 4 Pass Options, you must begin the climb to Angelus Oaks from the Mill Creek Ranger Station Food Stop by 10:30 A.M.

The Angelus Oaks Rest Stop closes at 1:00 P.M. and you must leave there before 1:00 P.M. in order to complete 4 Passes of this ride.

The Onyx Summit Rest Stop closes at 3:30 P.M. and you must arrive there before 3:30 P.M. in order to complete 4 Passes of this ride.

I’ve done this event several times and have had mixed results.  I have provided the results and the links to the event website below.

Today’s ride was very tough.  I have been in a funk lately and haven’t been training.  The last time I rode my bike was April 17, two weeks ago, for the Mount Laguna Bicycle Classic (MLBC).   My race report is here.  Prior to MLBC I had also been off the bike for at least two weeks.  By the way, I would consider MLBC a climbing century as well.  It is a century with 10,000 feet of climbing. With all this time off the bike my result today of 6 hours, probably isn’t that bad but I am really hard on myself.

I had many “WTF moments” during the ride particularly at times when I was barely pushing the pedals and merely producing 150 watts.  I also battled with the same cramping issues I had at the MLBC.  But I have decided it is just from poor fitness or better yet NO fitness.  In the last 45 days I have done less than 10 rides.  That would be one ride every 5 days.  But that’s how funny averages and math can be because I was off the bike much more than 5 days at a time.  Back on April 3-4 weekend I rode Saturday and Sunday doing the Hell’s Gate Hundred and Towne Pass century plus. But then  I didn’t ride for two weeks until the April 17th.  You can’t expect to do well at a climbing century if you are not fit.  I got ‘er done but it wasn’t pretty.

As you can see from the map above Breathless Agony starts and finishes in Redlands. The call-outs are:

There are three options for the ride.  You can do two passes, three passes or the whole enchilada of four passes.  I have always done the four pass option.

Power Chart for Timed Portion Only

The graph above is from Training Peaks 3.0.  It shows only the timed portion of the event.

I rolled at 7am with the Santiago Cycling club.  It was a massive group of at least 30 riders.  It was nice to ride out with a big group and benefit from the draft for the first few miles.  New for this year, or least since the last time I rode the event in 2008, is a checkpoint at mile 12.  The checkpoint was a surprise to me (no I don’t read the route sheet on this event 😉 .  As I was coming up on it I saw a large crowd of cyclists huddled around someone and my first thought it was– CRASH!

Data above is from the start in Redlands to the left turn onto Jack Rabbit Trail — Pass 1.  We were moving at a good pace with an average speed of 19.3 mph and my normalized power was 209 watts (3.2 w/kg). I got dropped on the first little climb but I knew that wasn’t my pace anyway.

The climb on Jack Rabbit Trail is always sketchy. But I found the trail to be in really bad shape on Saturday.  It seemed to me that the potholes and ruts were bigger. The sand and gravel patches were bigger.  The road was so bad in some areas that they were barricaded to ensure riders wouldn’t fall in what appeared to be sink holes.  It’s hard to maintain and even and steady effort through this climb.  I faded a little and let riders pass me that I thought on any other day I would be passing them.  My average speed for the Jack Rabbit Trail climb was 10.2 mph and my normalized power was 207 (3.2 w/kg). So far so good not a stellar performance but not THAT bad.

I consider the hardest climb of the four passes to be the Oak Glen Climb.  The other climbs are longer but the pitches are not as steep so they are easier to climb.  I made my up the climb thinking to myself “Man I really should be training more often”.  By the time I passed Chuck Bramwell’s water and photo taking spot I was really in the hurt locker.  I couldn’t produce any power and was just limping along.  I crested and began the high-speed descent down towards Mill Creek Ranger Station.  My average speed for the Oak Glen climb was 8.3 mph and my normalized power was 182 watts (2.78 w/kg).

After a quick stop at Mill Creek Ranger Station it was now time for the 30 miles of climbing that take you to Onyx Summit.  The next section is an 11 mile climb.  The hard part in my opinion is the section of road called Damnation Alley.  The weather was mild on Saturday.  On a hot day that the “Alley” can roast you since there is no shade to be found.  What I find tough about this section of road is that you can’t tell you are climbing but sure enough your legs struggle to keep the speed up.  I was really dragging and just turning the pedals over.  It wasn’t until I reached the Forest Falls turn off where I came into a spurt of energy.  I was able to maintain that momentum until Angelus Oaks.  My average speed to Angelus Oaks was 8.3 mph and my Normalized Power was 180 watts (2.75 w/kg)

The last climb isn’t that hard but you are fatigued and so it feels harder than it really is.  Additionally, you are at altitude from 6,000 feet to 8,443 at Onyx Summit.  Leaving Angelus Oaks the road has a lot of rollers and you get a chance to recover from your 11 mile climb.  It is a 19 mile stretch from Angelus Oaks to Onyx Summit but it’s not until the last 10 miles that you reach a sustained climbing section.

I was struggling with cramps and just overall fatigue.  I was counting down the miles and half miles too.  I passed the 7,000 elevation sign and remembered the last time I was on the mountain.  Brandy and I had done a training ride to Big Bear City.  She was on her multi-speed and I was on my Fixed Gear with a 49 x 18 gear.

I remember climbing ahead of her and taking pictures of the elevation signs and my bike parked in front of them.   I was really suffering and my pace was slowing dramatically.  I then see the 8,000 foot elevation sign.  I think ok 443 more feet of gain and this freaking thing is done.  Back home there is a hill called Newport Coast and it is 450 feet of gain in 1.5 miles.  Thank goodness because I wouldn’t want to go another mile more. 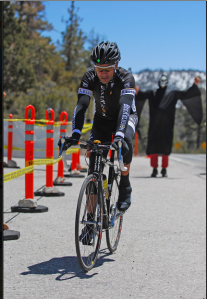 When I reached the summit, I got my picture taken, grabbed my “medal”, grabbed some strawberries, a banana, chips, water and I was headed down the mountain immediately.   I don’t like hanging out on the top of the mountain because the descent just gets colder and colder the longer you stay up there.  Besides there is much better food available at the finish.

So there you have it my Breathless Agony report.  I didn’t experience being “breathless” because I couldn’t ride hard enough.  I was fatigued, cramped and just plain out of shape for a climbing century.

This painful event served as a wake-up call.  No matter the funk or personal strifes going on in my life I NEED TO RIDE BY BIKE.  My bike has always been my way of keeping myself sane and physically fit.

What’s next for the Red Eyed Vireo?  I don’t really know because I am required to work the weekends I don’t have my son.  So unless I start racing on the weekends I have my son I may not have races to report about here on my blog.  The Furnace Creek 508 looms over me as it is May now and I have only five months to get ready for it.  I won’t have the benefit of doing events at race pace.  Training alone just doesn’t replicate the demands of racing.  But you know, things have a way of sorting themselves out over time.

Thank you for reading my blog.  Please pass it along to your friends, subscribe to it, and post comments if you feel so inclined.