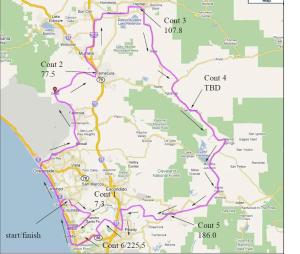 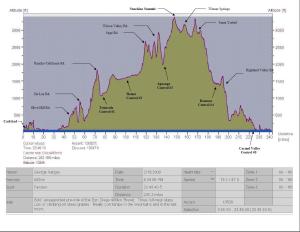 YOU CAN VIEW A SLIDE SHOW HERE

Brandy and I pre-rode the San Diego 400km Brevet. The event was 240 miles with 13,500 feet of climbing. A lot of the climbing was doable but the steeper grades really hurt us on the tandem. Our total time was 23 hours 52 mins. By contrast, I did a variant of this course solo last year at 20 hours. This is really an EPIC route. The San Diego mountains and high desert remoteness really test your physical strength and mental resolve.

Historically speaking, the 400km is my toughest event. I think it is because I want to do the event straight through without any significant stops. I have always tried to do this event without a full meal stop and without resting at any control. That strategy has worked, albeit painfully, with one exception. In 2004, my second year of Ultras, I DNF’d a 400km and that has stayed with me. It is the only brevet I have ever DNF’d in my seven years of doing Ultras.

Our day began early, REALLY early. We were up at 1:30am. We left at 2:40am from Huntington Beach to the start in Carlsbad. 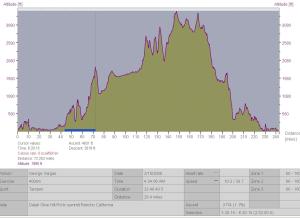 Mile 0- Start Control–We rolled at 4:30am. My goal was to do the most remote portion of the route in daylight hence the very early start time. The first loop was 14 miles in Rancho Santa Fe connecting back to the coast on Lomas Santa Fe and then north on the Pacific Coast Hwy. We stopped for a double espresso at Starbucks on Grand Ave and PCH in Carlsbad about 24 miles into the ride and then continued on to the San Luis Rey bike path.

At mile 46– we began the climb up Olive Hill Rd. The word “hill” in its name should have given me the first clue. I couldn’t remember ever being on this road. It was a good little warm up for what came next.

At mile 54– De Luz Rd is one of my favorite roads in San Diego. It begins with a good 1.5 miles of 8-10% grades. You continue climbing on De Luz Murrieta Rd and Rancho California Rd before descending into Temecula. Lots of good climbing. I had been concerned about the water crossings (very slippery) on De Luz Murrieta Rd but they were fine. We walked the bike across just in case. 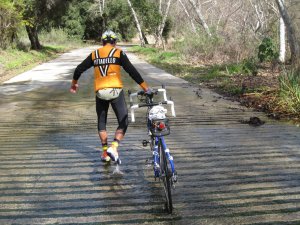 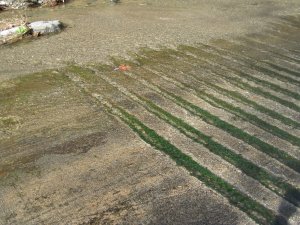 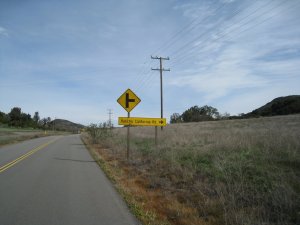 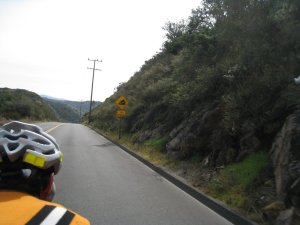 THE FAST DESCENT ON RANCHO CALIFORNIA RD. TO TEMECULA 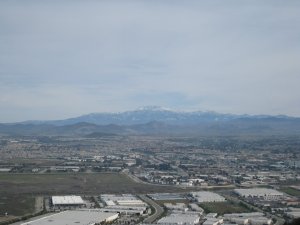 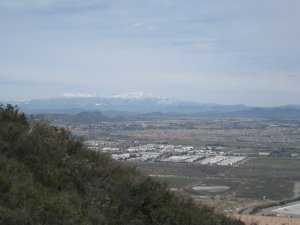 At mile 77.5– Temecula Control –We got our “proof of passage” and continued on in search of food. We eat at Wendy’s about one mile up the road on Jefferson Ave. I had a double stacker. Brandy had a grilled chicken wrap and we shared a baked potato. As we were leaving I gave the wheels a spin and checked the brakes. It’s a silly little habit I have. That’s when I noticed Pia had a broken spoke on the rear wheel. It’s funny how lately I’ve been packing things that I normally don’t take with me on a ride and then end up needing it. Maybe I shouldn’t bring them in the first place LOL!. This time I brought a Leatherman tool and sure enough I used the pliers to unscrew the nipple on the broken spoke and remove the spoke. The wheel has 32 spokes. The wheel was only slightly out-of-true with one missing spoke. Pia has disc brakes so even though the wheel was out-of-true we didn’t have any issues with braking like you would with rim brakes. 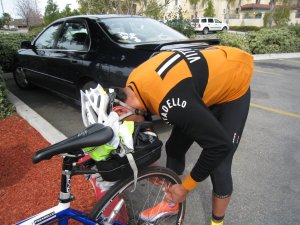 Mile 108–Hemet Control— The terrain was slightly uphill with no major climbs from Temecula to Hemet. On our way into Hemet someone attempted to hit us with a snowball or something similar. They were on the other side of the road traveling in the opposite direction and somehow we were bothering them. I guess as cyclists in these rural areas we are considered “game” and people love to throw things at us. I was so glad that we were on a tandem. I would be worried sick if Brandy was doing this event on her own. Even though it was only 30 miles after eating in Temecula we were hungry again. We stopped at Sonic’s. We had a couple of burgers some fries and a couple of Diet Cokes. We left Sonics and rode to the designated control, Denny’s, and then headed out of town on Stetson and State Street. The girls there were on roller skates as they serve you at your table or car. I got a kick out of that. 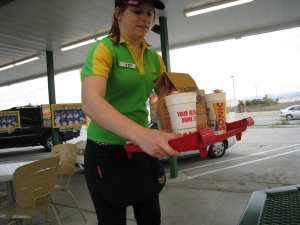 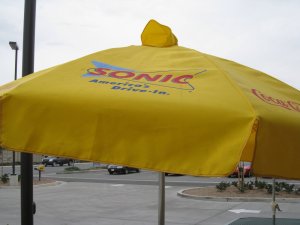 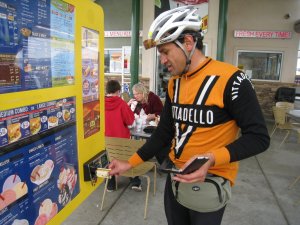 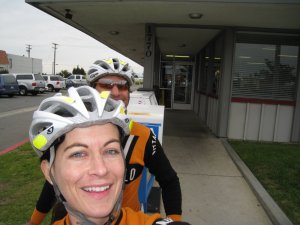 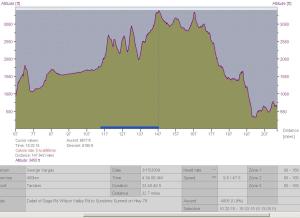 Mile 115– Sage Rd. The next 50 miles were the toughest part of the ride for Brandy and I (52 miles with almost 5000 feet) . Sage Rd is a climb that undulates as it climbs in elevation. Every now and then there were steep grades that caused us to grind up in our “granny-granny” (smallest chain ring and 28T cog). On one of those steep grades we dropped our chain and it got jammed in between the frame and the smallest chain ring.

Here we are on a blind corner, steep grade and no shoulder whatsoever trying to dislodge the chain. I felt exposed to the traffic. Many of the vehicles on this road are diesel pick-up trucks towing trailers along with the compulsory wide-ass side mirrors. When I mean there was no shoulder I MEAN NO SHOULDER. Like many roads in these rural areas there was the lane for vehicles, a curb, about 1′ foot wide dirt and then as a bonus this section had a 20 foot drop. The drop was convenient for the repair since it put the crankset at eye-level without me bending down LOL! While we were working on the jammed chain two MTB’ers traveling in the opposite direction pulled over. I thought it was very nice of them to stop. I believe one of them said their name was Dave Barrett. He offered me help but I had the chain jam under control. When I was done we walked back to his car and cleaned off my hands with some paper towels and water. Thank you Dave! 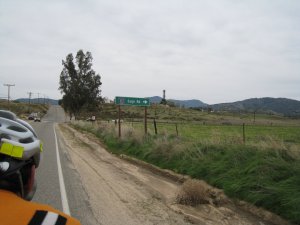 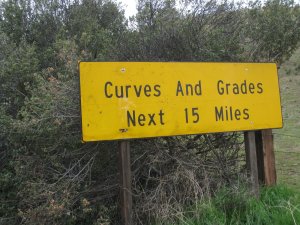 Mile 126– Wilson Valley Rd. Was very difficult for us. We were getting tired of the up and down terrain and the steep grades. At one point we came around a corner and I saw the “corkscrew” up ahead and actually exclaimed aloud “OH MY GOD!” I don’t usually do that. Heck I’m the guy that loves climbing. But I was hurting. I was really looking forward to the fast descent on Hwy 371 into Aguanga and get some reprieve from the climbing. 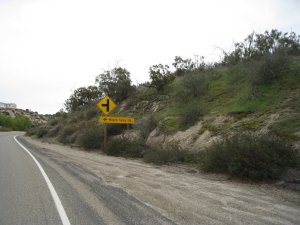 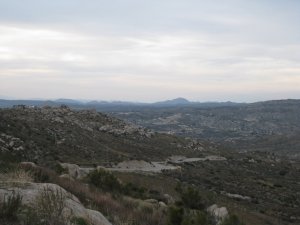 Mile 136- Aguanga Control We got some fluids and “proof of passage”. The next 35 miles were on Hwy 79. Nightfall was rapidly approaching and it was starting to get cold. We were only 140+ miles into this brevet, we were way “out there”– oh yeah it’s going to be a long night. 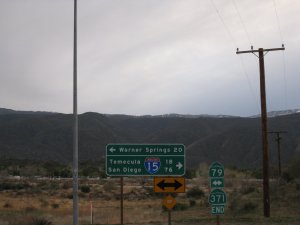 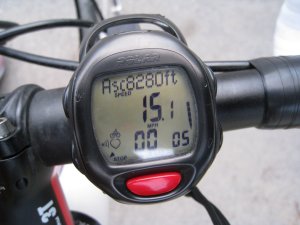 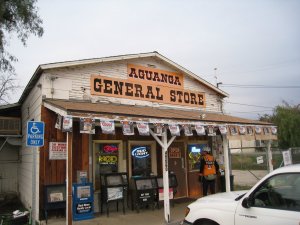 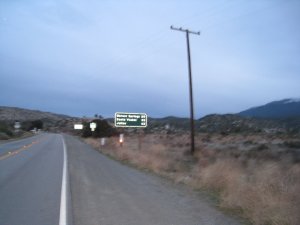 Mile 145- Dodge Valley Oasis- a restaurant owned and operated by Sadie, a sweet and energetic gal. She hustled to get us served quickly and back on the road. We were in serious need of food and a respite from the elements. We had a real meal; Tortellini, Ravioli, salads and coffee. We were stopped for about an hour. We felt very well taken care of by Sadie THANK YOU!

Leaving the warmth and security of the DVO was difficult. It was now 7:30 at night and very cold. Some of the patrons were talking about snow. You are mid way up a climb when you exit DVO so you got get back on task right away. We continued the climb up to Sunshine Summit. We did some descending and climbing through Warner Springs and Santa Ysabel. On the last pitch outside of Santa Ysabel my back was hurting so much I asked Brandy if we could pull over so we could “take 5”. 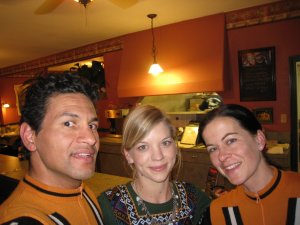 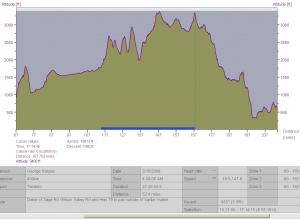 Mile 171.1– Getting to Santa Ysabel was a major milestone for me. Santa Ysabel meant the end of the climbing, end of the higher elevation, the end of the cold (or so I thought) and the feeling that every mile from that point forward was bringing us closer to home. Looking at the elevation graph you can see there was a lot of descending from Santa Ysabel to Ramona and more descending into Rancho Bernardo. We descended Hwy 78 and Old Julian Hwy to Ramona.

Mile 186- Ramona Control- I got a danish and a hostess fruit pie. Brandy got brownie and a coffee. She was falling asleep. I had not experienced any sleep deprivation. 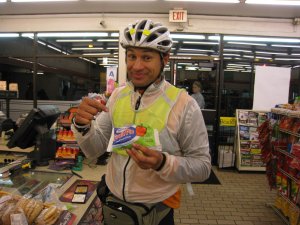 Mile 189– Highland Valley Rd was a fun descent at night. It was the first time I had ever been on that road in the dark. It’s a great stair-step climb going from Rancho Bernardo to Ramona and a very fast descent going back to Rancho Bernardo.

Mile 202– Pomerado Rd. We stopped to “regroup”. I changed to a fresh NiteRider Moab battery.

Mile 207.5– Camino Del Norte- We missed this turn because none of the lighted signs said “Camino Del Norte” like our route sheet. No… they said Twin Peaks. We were on a slight downhill and blew past the turn and continued downhill. Eventually, we pulled over consulted our google maps on our cell phone and realized we had passed Camino Del Norte and “climbed” back to the turn.

Mile 218– We were really tired. We were supposed get on the 56 Bike Path “at the SW corner of intersection”. We stood there trying to figure out what would be SW. It was late and cold and we just wanted clear cut directions. DON’T ENTER THE BIKE PATH ON THE GAS STATION SIDE ENTER THE BIKE PATH ACROSS THE STREET. THE ENTRANCE TO THE BIKE PATH WILL BE ON YOUR RIGHT AS YOU GO UNDER THE 56 FREEWAY.

Mile 223– We were tired, cold and irritable. The bike path was flooded so we had to take the detour. Once again the directions on the route sheet frustrated us. WHEN YOU CROSS THE STREET GO LEFT ON THE BIKE PATH.

It was really cold. I couldn’t believe how cold it was on the 56 bike path. Is this San Diego? I know it’s February but come on. We finally figured it out but wasted at least 20 mins and we were furious. Now that I’m nice and warm and sitting here with a full belly I think about how brain dead we were. It was 245 am!

Mile 225- Carmel Valley Control– Obtained our “proof of passage” while I ate yet another cheese danish. Brandy didn’t get anything she just picked from my danish

I’m almost embarrassed to tell people who are not Randos that it took us that long to ride 240 miles. But it is what it is. Randos know the difficulty of these epic rides. The climbs hurt us and steeper climbs hurt us even more. Even though we can descend faster than solo bikes we just don’t make up the time we lost climbing at 4-5 miles an hour. Subsequently, the longer you are on the course, the more stops you will take, the longer the stops get, and the more tired you get and the slower you get.

YOU CAN VIEW A SLIDE SHOW HERE

It’s done. It was tough more info to follow.